2019 marked the 70th anniversary of the NATO alliance 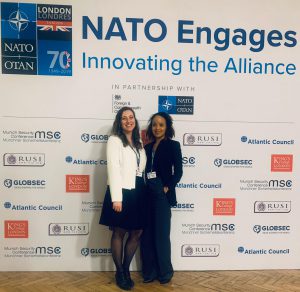 . Heads of states, governments and military leaders came together in December for the annual NATO Leaders’ Meeting to celebrate this milestone and discuss current challenges for the alliance. On the eve of this event, the NATO Engages conference invited leaders from NATO Allies and experts to reflect and debate on the future of the alliance. We had the opportunity to join the guests in Central Westminster Hall and engage in the conversation. So what are our take-aways from the conference?

To the future and beyond. Looking at how to innovate the alliance, the conference discussed hot topics such as Hybrid Warfare, Cyber Security, Artificial Intelligence, Social Media and Disinformation as well as Space Security. The key question was how NATO should handle these manifold challenges in the future. Most interesting to us: platform engineering as a tool to counter online disinformation instead of building strong counter-narratives. Indeed, this perspective opens the debate: should liberal democracies intervene in the business structures of private tech companies?

Diversity matters. Canadian PM Trudeau voiced it very clearly: “More diversity makes for better outcomes.” Women and cultural diversity in peace and security was not the topic of any panel, but speakers and moderators actively requested the inputs of women and youth. Is international security policy still the “old white boy’s club”? Hearing how this perspective is increasingly being challenged among experts and leaders was important. However the composition of some panels shows that there is still a long way to go. Conversations with panellists and participants underlined the need to continue pushing for more inclusion and diversity in foreign policy.

Brain dead? After 70 years, are we today experiencing the brain death of NATO, as suggested by Emmanuel Macron? Or is the alliance a relevant platform to tackle emerging security challenges?  The conference did not merely highlight NATO’s achievements, but also debated the challenges it is facing. Deep ideological heterogeneity within NATO put the question of values and mission back at the centre of the debate. In this context, Turkey’s controversial purchase of the S-400 and the offensive in Syria were subjects of heated debates. Also the question of defence spending was raised, where Trudeau was having a bad sell. Nevertheless, the biggest problem to NATO is cohesion – or to be more precise – the lack thereof.

NATO Engages was a mixture between panels with academia and policy advisors, discussions between politicians, and storytelling elements. The last part connected NATO to people and their experiences: A former US representative to NATO on 9/11, a young Afghan singer hoping for a better life for Afghan women, a son of refugees from the Kosovo war, a 14 year old unfolding the perspective of Gen-Z. Listening to their stories highlighted in another way, how decisions in international security are not abstract but severely impact people’s lives in very diverse ways.

Empowered and Inspired. Attending NATO Engages enabled us to connect with leading experts and practitioners. It reaffirmed the importance for our generation to actively engage in international security policy, to question and debate the status quo, in order to find innovative solutions to the challenges of our times. In this vein, we are now planning the HSSC activities for 2020, with the goal to debate international security issues in an inclusive and interdisciplinary space.